The unbelievable Story about a friendship between Leopard and Cow

An unusual relationship developed between a wild leopard and a cow in Gujarat, India, that has to be seen to be believed. According to the original story published on the website the incident took place in 2002. Many social media posts claim that the leopard’s mother was killed and the cow offered it milk and comfort.

That’s simply not true, but the story is still incredibly fascinating.

The story begins with increased complaints about leopard sightings in the village. Forest rangers decided to relocate some of the leopards to a nearby forest.

That’s when things started to get interesting.

A family that owned a cow and two bulls noticed a leopard begin to visit their cow.

The two unlikely friends seemed totally at ease with each other.  The prime-minister’s wife who herself once raised an orphan tiger cub believes that the motherless leopard met this cow. The leopard visited the cow continuously  every night. For some reason, between November 30 and December 29, the leopard stayed away. But it was seen in the vicinity.

The leopard continued to visit on and off until the first week of March, and then never returned.

There have been many varying interpretations for the strange behavior. Some suggest the female leopard captured beforehand was the mother of the visiting leopard.

“I could not understand why the leopard regularly met the cow and behaved in a manner which was not believed by people. It was more surprising to me that why a cow accepted its enemy and loved like she loved her calves,” the author stated. “The cow would sometimes lick the cat on its head and neck. Indeed, to many observers, it seemed that the cow was behaving towards the leopard as she would towards her own calf.” 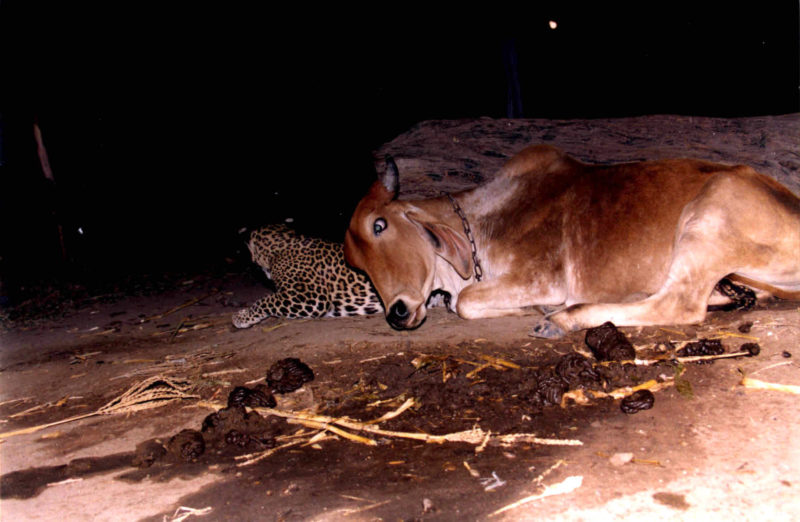 No one will ever perhaps be able to state with confidence, just what the truth was, but it is clear that the behavior of both the cow and leopard was strange and incredible.