Skip to content
The Dog Kept Sniffing a Bump on Her Nose. It Was Cancer

The Dog Kept Sniffing a Bump on Her Nose. It Was Cancer 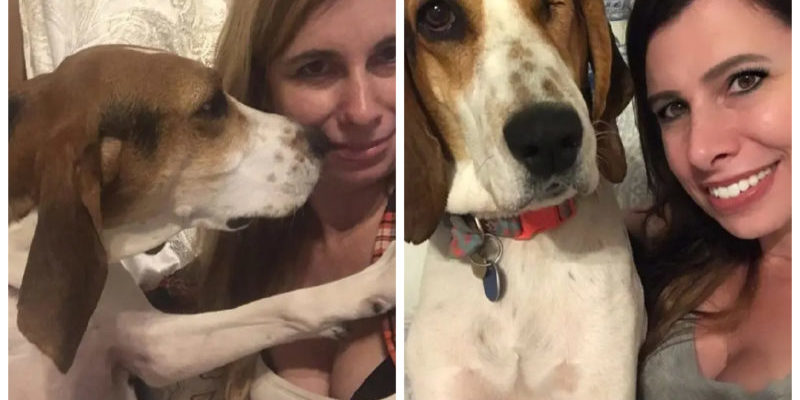 We have heard of dogs sniffing out hidden drugs, explosives, or missing people. Can some of our four-legged friends spot cancer by its scent, too? Lauren Gauthier had a small, pimple-like bump on her nostril. She didn’t think much of it at first, but her dog Victoria wouldn’t stop sniffing at it when they sat on the couch together.

“She would really smell it a lot, and then she would sit back and kind of look at me, and then go back and smell it again,” says Gauthier, a lawyer and dog-rescue founder in New York. “Almost like she was trying to communicate with me that something was wrong.” Victoria, a treeing walker coonhound that Gauthier rescued in South Carolina, kept sniffing at her nose even when the bump appeared to go away. After a few months of this, Gauthier made an appointment with a plastic surgeon. They took a sample of the bump and sent it to a lab for testing. The result: a diagnosis of basal cell carcinoma, the most common type of skin cancer.

“I’m glad that I caught it — or that Victoria caught it,” Gauthier says with a laugh. She remembers the plastic surgeon chuckling when she mentioned her dog’s insistent sniffing. “I don’t know how much stock he put into it.”

Could her loyal hound have really smelled health trouble, though? “My guess would be that it was a coincidence,” says veterinarian Will Draper, DVM, the CEO and practice director of The Village Vets in Decatur, GA. He says there is a chance that the growth simply smelled different to Victoria — or that its texture or taste interested her.

Canines known as sniffer dogs are being studied to see if they are able to spot the scents of certain types of cancer. And unlike Victoria, they’re trained to do so, Draper says. The hope is that sniffer dogs might be able to spot early signs of lung cancer in your breath, or clues of bladder cancer in a sample of your pee, he says.

Still, an untrained dog smell powers are nothing to sneeze at. “It’s just amazing the scents that they can pick up and we can’t, because their olfactory system and their nasal passages are just more developed and stronger than ours are,” Draper says. Whether Gauthier’s dog smelled a problem or not, she’s grateful that her furry friend was so nosy about the bump on her nostril. Her plastic surgeon removed the cancer, and she’s pleased with her recovery. She’ll be seeing a dermatologist every so often just to play it safe.

And she may be giving Victoria “extra kisses and treats” for a while, too.

Gather said that there is a strong bond between the dog and her. But the most important thing is that the dog really had saved her from a lot of further difficulties from that.