Mother Cow Hides Newborn Baby to Protect Her from Farmer 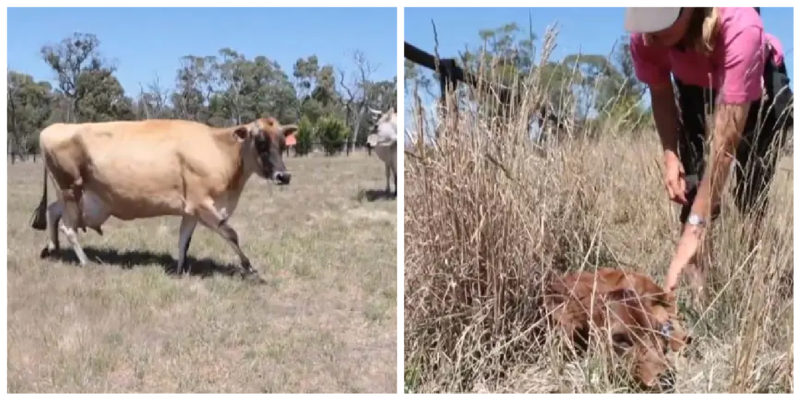 This story is about a former dairy cow was so saddened by memories of her previous babies being taken away by a farmer that she hid her newborn calf to keep her from being taken, too. A cow, named, Clarabelle was rescued from a dairy farm in late November by the Australian farm sanctuary Edgar’s Mission. She was hours away from slaughter at the farm, where her milk production was too low to bother keeping her alive.

When Clarabelle arrived at the rescue, volunteers discovered she was pregnant. A week before her due date, volunteers noticed that Clarabelle was acting strange – normally eager to eat, she was staying at a distance and acting wary. After a bit of a search, they discovered that she had secretly given birth and hidden the baby in a nearby patch of tall grass.

In general cows are known for their deep maternal instincts. Dr. Holly Cheever documented a story from her early days as a dairy veterinarian where a pregnant cow, knowing that her farmer would take away her baby, gave birth to twins and took only one back to the farmer. She kept the other hidden away in the pasture until the farmer noticed her reduced milk production, found the baby, and took it away too.

Luckily this baby – named Valentine, as she was born on February 14 – is also destined for a better life than most dairy cows and will remain at the sanctuary with her mother. This time Clarabelle is lucky, because Valentine will live with her as long as it is possible. And now Valentine has grown up and she still has a close bond with her mother.

What do you think about this story? Please share this story with your friends or write about it in comments below.