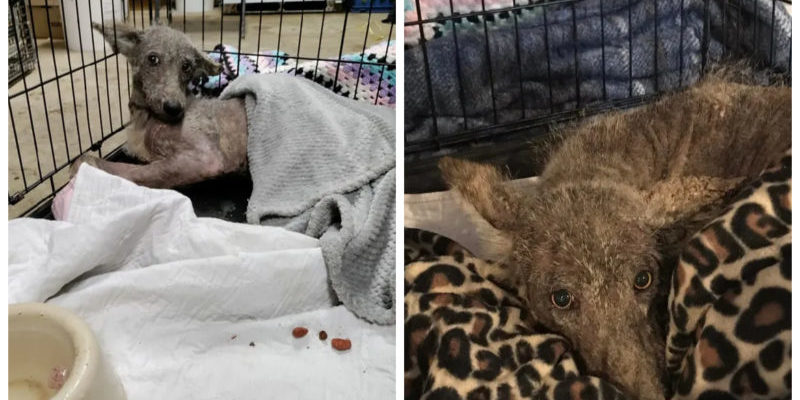 Just before the New Year, on a cold and snowy day in Pennsylvania, Christina Eight noticed something peculiar outside her home. There, in the snow, were fresh tracks from what appeared to be a dog. The pattern they made had Eight feeling concerned.

“I saw that there were dog prints that went up to my door, like he was looking in for help,” Eyth told The Dodo.

Eight decided to follow the tracks to where they led, just outside her basement door.

“That’s when I saw this poor animal,” she said. “He looked so cold and was shivering.” But the animal’s appearance actually spawned more questions than answers.

Fortunately, after several minutes of skittishness, Eight was able to coax the animal into her basement with food, water and warmth.

He appeared to be suffering from mange — and the condition made it unclear exactly what kind of animal he was. A domestic dog? A coyote?

Christina  wasn’t completely sure whether it was domestic or wild animal as he never showed signs of aggression. Shw just noticed an animal in need of help and wanted to help him.”

And that was what she did. Eight posted about the mystery animal on a local message board, and soon volunteers from TJ’d Rescue Hideaway, an animal welfare group, were on the scene to assist.

They, too, weren’t certain what the animal was exactly. But they knew he needed their help regardless.

“Maria [the group’s organizer] and her team came out and were able to catch him without hurting him at all,” Eight said. “[They] transported him to Wildlife Works-Mount Pleasant to get treatment and testing done to confirm what he is.”

Though it would take several weeks before the results came in to ascertain if the animal is a dog or coyote, rescuers set about treating him with the same care and respect all animals deserve — just as Eight had done.

But then came a twist that no one expected. A few days after being rescued, the mystery animal managed to break out of the treatment facility — and was never seen again.

The mystery of his species, however, still remained — until now.

Turns out, the creature found cowering outside of Eight’s door was a coyote all along, and now he’s back in the wild where he belongs. He made sure of that.

Still, Eight has no regrets about stepping in to assist him the best she could.

“No matter the results to the test, I wouldn’t have changed anything I did to help him,” Eight said.